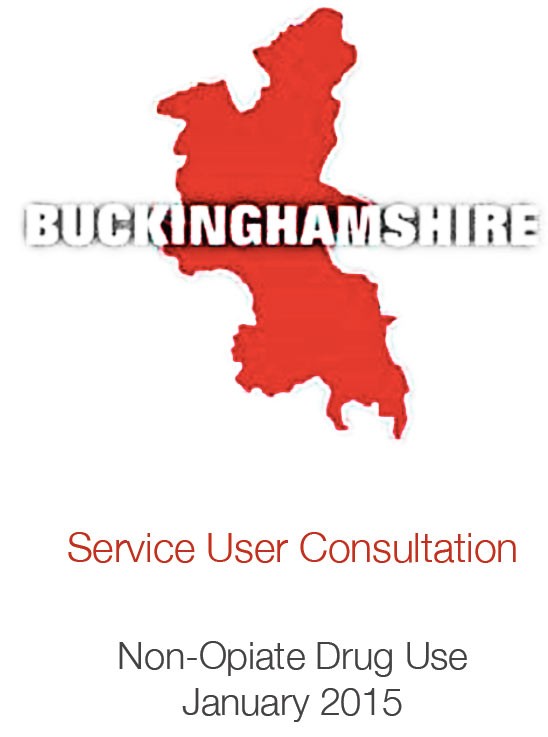 The Bucks service user consultation comprised a sample of 121 respondents in total, made up of managers, workers, users in services and users outside services.

The majority of non-opiate users identified took stimulant drugs. Mephedrone was the most commonly used stimulant with nearly 54% of respondents having taken it. This report found that mephedrone was associated with adult problematic drug use, had some of the highest risk behaviours, and was favoured by a growing number of young people in Buckinghamshire.

A cohort of mephedrone injectors were identified outside services in Aylesbury. Some of these individuals injected 20 to 50 times a day over a period of 3 days or more without food or sleep and were re-using needles and admitted to sharing. Many I.V. users who injecting drugs previously said mephedrone was more compulsive than crack or heroin. Some reported using 12 to 20 grams in a 24 hour period. Hepatitis C was identified in this group and there was a lack of injecting hygiene, with some users injecting in pitched tents.

The youngest injector identified was a 17 year old male who injected mephedrone frequently. There were suggestions by young adults and a perception by youth workers that the practice of injecting mephedrone may be happening with other under 18 year olds, some of whom were well educated and came from affluent backgrounds. There was also a concern among youth workers that young people were learning injecting practices from adults who were not taking heroin or connected to the crack and heroin market.

Weight loss was experience by 40% of all respondents, 20% reported stomach pains, 12% experienced kidney issues and 12% heart problems. Hepatitis C, increased vein and tissue damage accounted for 10% of the sample.

Various psychiatric health issues were experienced as a result of taking non-opiate drugs. Just over 40% of all respondents said they had or were experiencing depression and 18% reported anxiety issues. Other psychiatric issues experienced were paranoia, aggression, psychosis and 6% of the sample said they self harmed.

Rent arrears was the debt most experienced by respondents outside services. However, court fines, debt to family and friends, dealers and debts to other users were also significant.

The majority of users outside services identified themselves as homeless and expressed a need for adequate housing. There was a clear difference between users in services (who tended to have some form of housing) and those who were outside services, who were rough sleeping, sofa surfing or living in tents.

Cocaine & Health
Search for a course
Want to contact us?