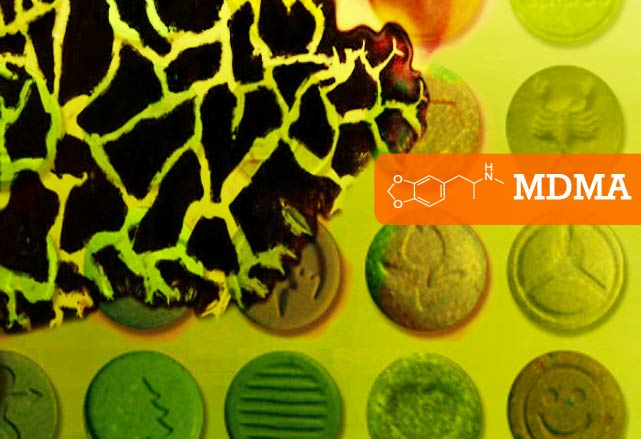 1891 A number of German-language sources credit the first synthesis of MDMA to an undergraduate German chemist, Fritz Haber (1868-1934). The future Nobel laureate reportedly synthesized 3,4-methylenedioxy-methamphetamine (“Ecstasy”) in 1891. However, the synthesis does not appear anywhere in Haber’s doctoral dissertation The case remains unproven.

1914 MDMA patented by Merck Pharmaceuticals. There is no evidence to suggest that MDMA was used in pre-World War 1 Germany as a dieting aid. No real evidence to indicate that MDMA was issued to German troops in the First World War as a stimulant or an appetite-suppressant.

In 1914, soldiers from both sides did indeed light each other’s cigarettes and even play football together. But the soldiers were not ‘loved-up’ on MDMA; just intoxicated on alcohol.

1935-39 The Army Chemical Centre studied MDMA toxicity by giving MDMA to animals. It is determined to be less toxic than MDA.

1941 First human trials with MDA as part of an exploration of possible therapies for Parkinsonism.

1949 – 57 MDA studied as a potential antidepressant and/or anorexic agent by Smith, Klein & French. More than 500 people were given MDA during the course of this investigation.

1950 – 1953 Harold Blauer dies of an overdose of MDA (code name EA-1298) during an army-sponsored drug experiment. The army was working to develop new “truth serums” or incapacitating agents and injected Blauer with 500 mg MDA IV.

1965 Alexander Shulgin re-synthesises MDMA in US.

1967-68 The first small underground batches of MDMA are synthesised. Relatively few individuals have tried it at this point.  Shulgin begins working with MDMA personally and introducing others to it.

1970 ‘U.S. Drug Abuse Regulation and Control Act of 1970’. It places most of the known hallucinogens (LSD, psilocybin, psilocin, mescaline, peyote, cannabis, & MDA) in Schedule I. MDMA is still legal at this point.

1974 2C-B is first synthesised by Alexander Shulgin during an exploration of the homologues of DOB another compound.

1977-81 Only eight individuals seek emergency room treatment after the use of MDMA during this four year period according to the Drug Abuse Warning Network (DAWN).

1985 MDMA temporarily placed into Schedule I by the DEA under emergency scheduling provisions. First reference of MDMA in UK to a wide audience came from ‘The Face’ magazine.

1986 Two London Djs visit Ibiza returning to England with a new style of dance music which became known as the ‘Balearic Beat.

1987 First published report of a human death due to MDMA use.

1988 MDMA is placed back into Schedule I without challenge by DEA.

Late 1980’s 2C-B is marketed as an MDMA (ecstasy) replacement and become somewhat more popular after MDMA is scheduled in US in 1985.

1992 The ‘underground’ trend from Acid House parties split off into another direction. This followed after several groups of individuals began to link up with the mobile sound systems of the free festival circuit that have toured Britain since the 60s.  During 1992 ‘ravers’ and ‘travellers’ began to organise large scale ‘festi-raves’, the accumulation of these events resulted in Castlemorton where an estimated 25,000 to 40,000 individuals were present (Wright, 1996).  The organisation of this event was mainly by word of mouth unlike its early counterpart whereby the introduction of the car/mobile telephone enabled organisers to co-ordinate large scale private parties in dis-used warehouses.

In 1992 Exodus was formed, initially to provide a roof for the homeless in a once derelict building which saw the later set up of a community farm.

In 1992/3 Exodus supported the squatted occupation of a derelict hotel and started channelling money which was raised at soft drink stalls at the dances into squat renovations.  A series of massive police operations ensued, costing over £103,000, on the squatted hotel on Exodus’ Long Meadow Community Farm and on a pre-dance assembly point (Wright, 1996).

1994 Public outrage, due to bad publicity of Castlemorton by the tabloid press in some ways sowed the seeds for the Criminal Justice Act 1994.

The Criminal Justice Act politicised certain aspects of the underground with the Advanced Party and United Systems protesting against the new laws.  At the same time these groups have forged links with other affected bodies such as ‘DIY collective Justice?’ who also organised illegal parties.  ‘Justice?’ desired to raise public awareness about the CJA, they also squatted a disused courthouse and turned it into a thriving community centre.  A cafe, information centre and exhibition room were opened, Tai Chi, yoga and Shiatsu classes happened on a regular basis. There were spaces available for artists to work, advice for squatters, a crèche, a visiting hairdresser and music evenings. This phenomena became known as DIY (Do It Yourself) culture.

1995 Ecstasy culture fully mainstream. Club promoters refer to this year as being one of their most profitable.

2C-B added to Schedule I making it illegal to possess or sell in the United States.

2004 Ecstasy use levelled out in the UK, though deaths have risen. Deaths usually associated with hyperthermia and combination of other illicit drugs and alcohol, not MDMA. Possible to buy a MDMA tablet for £1 or less in UK, though it is rarely relatively pure MDMA or MDMA at all. Strong batches have surfaced and also MDMA powder and crystals on increase.

2014 After years of low purity, high potency MDMA tablets are circulating in the UK resulting in a few deaths due to the compound PMMA.

2018 High purity MDMA is in circulation in the UK. High profile deaths at festivals have prompted some festivals to allow people to test their illegal drugs. A number of live music events are aiming to introduce the scheme with the support of local police forces.

History of Mephedrone
Search for a course
Want to contact us?